Although much of fabricatr’s is designed to generate hierarchical, nested data, we also provide functions to generate panel and cross-classified (partially nested) data. In this vignette, we offer instructions to do both. 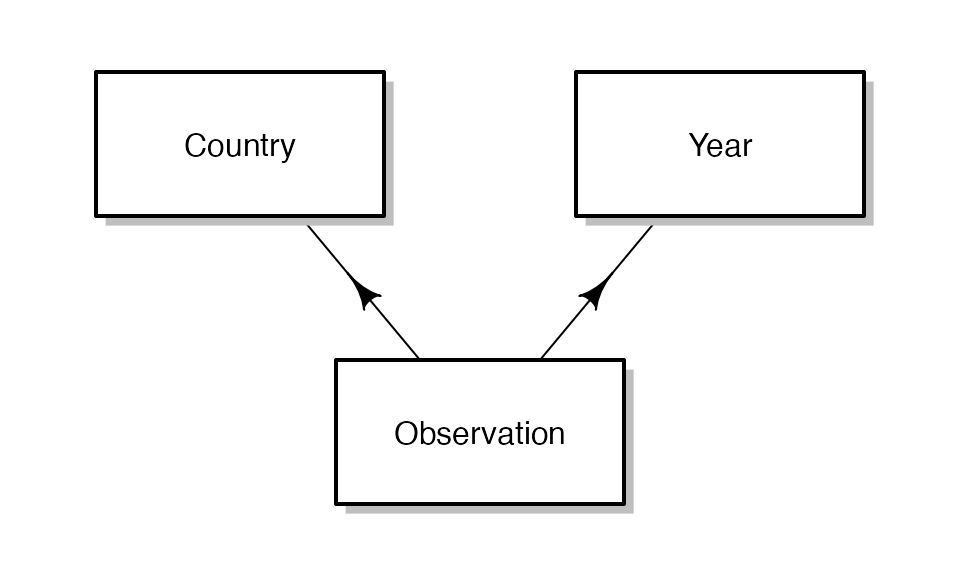 The steps for generating a panel in fabricatr are as follows:

First, we need to generate country and year data. By default, fabricatr fully nests subsequent levels under the first level call. Here, we must explicitly not do this.

Note that this function call will not evaluate because we have specified the two non-nested data frames, but not yet told fabricatr what to do with them. The second (and any subsequent) non-nested levels should contain the nest = FALSE argument – otherwise, years would be interpreted as to be a level nested within countries. Each level will track all of its own variables, so it is possible to add as many features as you would like to the levels.

Specifying a merge function to create a panel is simple. You need only to tell fabricatr which levels you wish to merge, and then you will have an assembled panel and can generate new variables at the observation-level. We do this using a call to cross_levels():

Note that cross_levels() takes a single required argument, which is of the form by = join(...). This join command tells fabricatr how to assemble your data. In this case, we are telling it to join the countries data frame to the years data frame, resulting in country-year observations.

Just like with regular add_level() commands, you can add new variables which have full access to the existing columns.

Another type of data fabricatr excels at enabling is cross-classified data. In a cross-classified dataset, just like in a panel, observations draw from a combination of multiple existing data sets. Our example in this vignette will be students. Students attend a primary school and a secondary school. Unlike in a panel, not every student attends every school; and not every combination of schools has exactly one student. Student outcomes depend both on primary and secondary school education.

Let’s begin by visualizing how our data will be laid out: 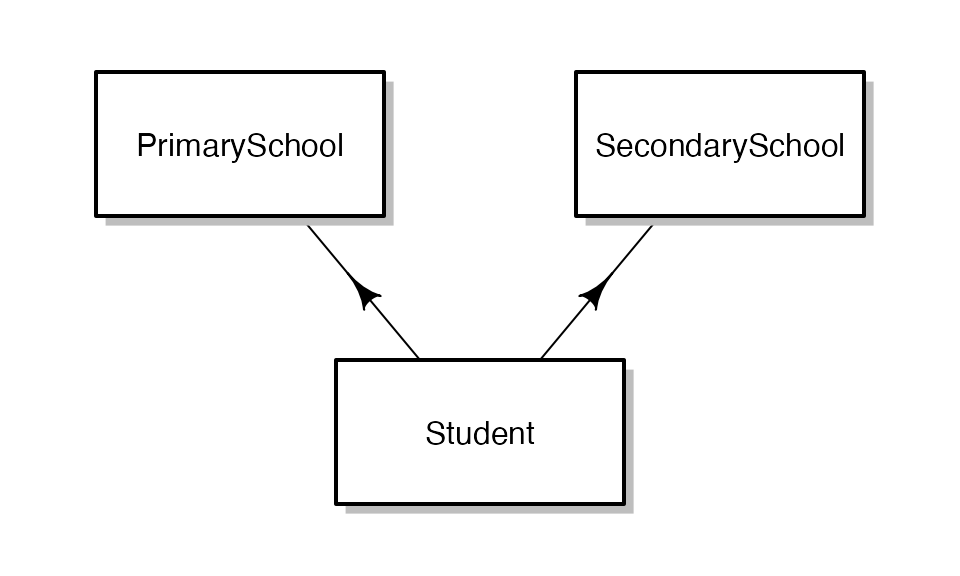 The main steps involved in generating cross-classified data are as follows:

We have already learned above how to generate multiple non-nested data frames; now we example how to specify a merge function for cross-classified data.

One difference between panel data and cross-classified data is that we need to specify the number of observations we will create by combining the existing levels of data. For example, there may be 20 primary schools and 15 secondary schools in a mid-sized city, but several thousand students. Specifying this is as easy as providing an N argument to the link_levels() call. At this juncture, we will assume there is no relationship between the primary school a student attends and the secondary school a student attends.

We see that compared to generating a panel, the only change is to switch the joining function to link_levels() and adding an N argument. The result is, predictably, a data frame containing 1500 observations, each of five columns: primary_schools (ID), ps_quality, secondary_schools (ID), ss_quality, and students (ID).

As shown above, it is simple to add variables to the new, cross-classified data:

A linear regression confirms that the resulting data approximately reflects the the data generating process:

Other variables can be added in the students level, or indeed in either of the component levels.

A variety of R packages support functionality for joining data in various ways. However, a key feature of fabricatr is that it is possible to generate correlated cross-classified data. Above, we assumed that the primary school a student attended has no relationship to the secondary school the same student attends. This assumption does not reflect actual patterns in the social world. We might, for example, reasonably assume that students assigned to better primary schools are later assigned to better secondary schools – whether due to economic geography of the area, selective admissions, or other causes. It is easy to specify a correlation between these outcomes using much the same syntax we used before:

Technical details of the implementation of this function are contained below, but in the mean time the important thing to note is that rho can be any value from -1 to 1, and that the resulting correlation will be approximately equal to rho.

Note: Because of the technical details of our implementation, the true correlation in the resulting data will be slightly attenuated (smaller in magnitude) from the specified rho. There is no general purpose correction to compensate for this attenuation.

We can check the resulting correlation here:

It should be noted that the specified correlation exists only within the variables on which a join was specified: other variables from either data source will not be explicitly connected except through the joined variables.

Correlation is only possible for cross-classified data, not panel data.

All of the functions specified above work when joining more than two levels. We could extend our student example to include, for example, college quality. Nothing changes about the join syntax beyond the addition of the third or subsequent variable names:

Instead of specifying a rho correlation coefficient, users can specify a sigma correlation matrix to make the resulting correlations more sophisticated. Consider the following setup:

sigma must be specified as a symmetric square matrix with a diagonal of all 1s and a feasible correlation structure.

The implementation of the correlated join is done via the Gaussian copula. Mathematically, what is occurring is as follows: