fabricatr makes it easy to generate common social science variables. While our other online tutorials focus on exploring the full extent of fabricatr’s capabilities, this tutorial focuses on simple plain-English introductions to common variable types used in social science research, along with an introduction to the statistical terminology associated with them. Examples are drawn from pre-analysis plans filed with Evidence in Governance and Politics (EGAP).

If you already feel comfortable understanding these concepts and would prefer a technical manual for our variable creation functions, please consult our Generating Variables tutorial.

The simplest possible outcome of interest is a binary outcome: one that can be either true or false. An example of this sort of outcome in a social science research context is whether or not a subject performs an action: Does a person seek medical treatment? Does a person turn out to vote? Does a person write a letter to their congressional representative? Is an infrastructure project completed on time? These sorts of questions are typically modelled as binary outcomes. The “yes” or “no” answer to your question of interest is represented as 1 (“yes”) or 0 (“no”) numerically.

In fabricatr, binary data can easily be modeled with the draw_binary() function:

This example introduces you to a few new functions. First, we can wrap multiple variable creation commands in a fabricate call. This will ensure the result is a data frame, and that each variable creation command has access to the previous variables. Second, you see that we can model age using R’s built-in runif function. If you would like more information about modeling statistical distributions in R, see the ?Distributions manual page. Third, you see that we model turnout probability statistically; if the user has an age below 40, they receive turnout probability 0.4. If not, they receive turnout probability 0.7.

As noted in the introduction for this tutorial, the target audience for this tutorial is someone interested in common social science outcome variables, but without a strong background in thinking about modelling these variables. If you feel comfortable modelling but need to learn how to specify the variables in fabricatr, please see our tutorial on variable generation with fabricatr. If you need more information about modeling the structure of data or implementing multi-level models, panel data, or cross-classified data with fabricatr, then please see our tutorial on building and importing data.

The type of data generated for many survey questions is “ordered”. Ordered data includes the “Likert scale”, and is used when respondents to a survey report an outcome which has a logical ordering from lowest to highest but is not necessarily measured in numerically comparable terms. Consider a basic question like “Do you approve of your mayor’s job performance?”. There are many ways you could measure a respondent’s answer to this question, but one of the most common is by offering the respondent the choice to “Strongly Disapprove”, “Disapprove”, feel “Neutral”, “Approve”, or “Strongly Approve”. This five point scale is ordered data.

We generate a simulated latent variable and then translate it into a simulated ordered variable, like so:

In the above graph, most respondents (the “density” represented by the height of the curve) are neutral about the mayor, and relatively few hold extreme opinions. We generated a “normal” latent variable for our respondents and then translate this to the ordered outcome. The simplest normal variable is the “standard normal”, a random variable whose mean (center) is 0, and whose standard deviation (spread) is 1. So, although it is not shown in the graph above, the dashed lines which divide the ordered outcomes are located at -1.5, -0.5, 0.5, and 1.5.

Of course it would also be possible to affect the center and spread of this question:

Although thinking about ordered data in this latent context may seem strange at first, actually generating an ordered data outcome in fabricatr is quite easy:

For x, we use the rnorm command to generate 100 standard normal draws representing our respondents. For breaks and break_labels, we mark and label the breaks as we did above.

Here, colors indicate the two parties. We see that some members of the red party do disagree with the mayor, but the overwhelming majority do not, and vice versa for the blue party. Now, let’s put our visualization into action:

It is easy to play with the location of breaks, labels for breaks, and format of the underlying latent variable. Here’s an example where the latent variable is “uniform” – there is an equal likelihood of choosing each of the options:

Users who are new to the R programmming language and want to know more about other statistical distributions beyond the norm and unif distributions used here, should run the command ?Distributions in the R console.

Many survey responses that focus on labeling agreement, support, or quality evaluation, including the example above, are called “Likert” data after the psychologist Rensis Likert. These scales are typically 4, 5, or 7 point scales of a measure. fabricatr includes a simple shortcut to make Likert variables without needing to fill out the breaks and break_labels each time.

By using draw_likert, users only need to specify the x latent variable – assumed to be distributed with breaks spaced 1 unit apart and with the data centered on 0 – and the type of Likert they would like (the number of categories). In this example, we examine the same data above, but with a 4-category Likert scale where the options are “Strongly Agree”, “Agree”, “Disagree”, and “Strongly Disagree”, with no neutral category.

Surveys often collect demographic information from respondents, including age, gender, and ethnicity. By this point in our guide, you have begun to see how you might generate a continuous numerical variable like age, or how you traditional binary measures of gender might be specified. But some variables, like inclusive measures of gender, or ethnicity, (or hair color, eye color, city of residence, or many other possible variables of interest) are not “ordered” in any sense.

These data are often called “categorical” data – a given person has a probability to belong to each of the possible categories.

Imagine that researchers are conducting a survey in Kenya. They wish to capture the country’s four largest ethnic groups: Kikuyu, Luhya, Kalenjin, Luo, and are also interested in capturing the smaller Maasai group. Other respondents are identified as “Other”. When preparing their research, the researchers must simulate the ethnicity of their expected respondents, so they first gather the proportions of each group,

fabricatr makes it easy to generate data based on specifications like these using draw_categorical:

Researchers might simulate this experiment by choosing a population level Average Treatment Effect (in our example, assume a moderate treatment effect of 15 points), and adding a shock centered at this point to each treated unit’s pre-treatment outcome (in addition to adding noise to the control group). A challenge with this data is that it is naturally truncated: individuals whose scores were already quite high may now be modeled as having post-treatment scores above 100.

In fact, in this example, some respondents have pre-treatment scores above 100! This matters because the real-world data gathered later will be truncated, and so the researchers power to detect effects may be compromised because of a high density of responses near the cutoff. As a result, it is important that researchers model the truncation directly. Doing so is simple using functionality provided by R: pmin and pmax.

Researchers may be interested in “count” outcomes, which describe a count of events of interest during a fixed time period. For our example in this section, we draw from “Propaganda and Conflict: Evidence from the Rwandan Genocide” (Yanagizawa-Drott 2014), an article which uses a quasi-experimental design to establish an association between the broadcasts of Radio Télévision Libre des Mille Collines and local instances of violence during the Rwandan Genocide. Substantively, the paper’s conclusion is that higher density in radio coverage is associated with greater local participation in genocidal violence.

In our version of this data, we have two variables of interest: number of violent incidents, and density of radio coverage. We know a priori that both variables must be at least 0, we are unsure what the maximum number might be, we know that the number of violent incidents must be a “discrete” variable (in this case, a whole number) while radio coverage is “continuous” (can take fractional values).

First, to model the number of violent incidents, we make use of fabricatr’s draw_count function, which is quite simple – it needs two arguments: mean, which describes the mean count, and N, which describes how many units you need count data for. Statistically, this function generates “Poisson-distributed” count data. This is one of the typical distributions used for count data.

R makes available a fairly simple function for generating this sort of data, rlnorm, which generates log-normal data. Log-normal data is one of the key distributions used to model data with a skew like the one we hypothesize: for example, income data in a population (where relatively few wealthy people have substantially more income than relatively many working class people). rlnorm takes three arguments: n (the number of observations), meanlog (the mean of the log-transformed data), and sdlog (the standard deviation of the log-transformed data).

Replicating real data is important because the inference you draw when modeling results depends on the “support” (range of values observations take) and “density” (how many observations take each value); to the extent that real-world data will likely be dense in some regions of the data and sparse in others, it is important that your synthetic data is as well in order to recover inferences that will be accurate to your future real-world inferences, and particularly your uncertainty about those inferences. 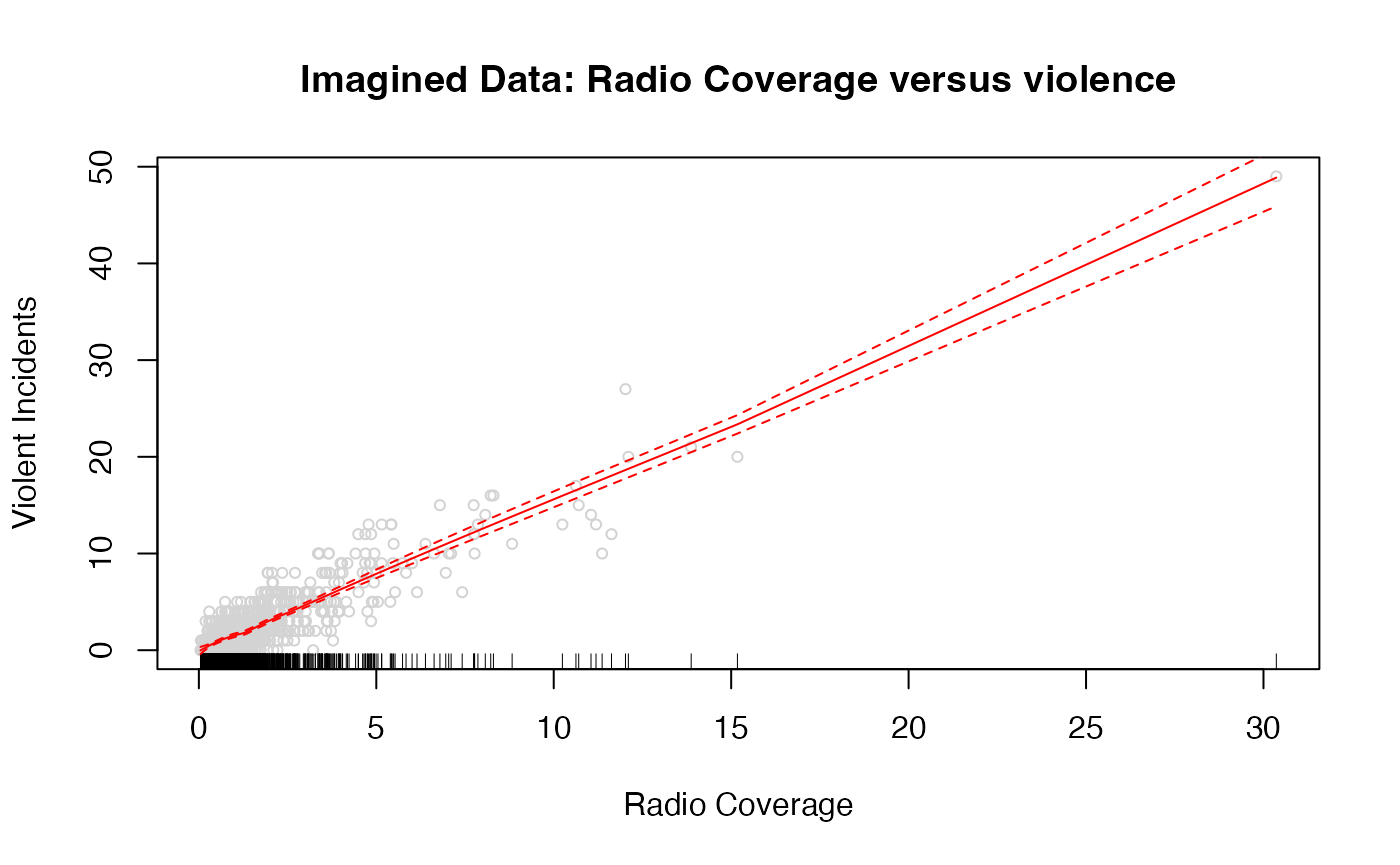 Thinking about choosing parameters for meanlog and sdlog is somewhat more mathematically complex in skewed distributions and depending on your use for, you might choose different parameters. Consult R’s documentation on log-normal data by running ?Lognormal. In addition, you may find it useful to investigate other distributions commonly used for this purpose including ?Beta and ?Gamma.

This brings us to the end of this introductory tutorial on common social science variables. As a next step, our tutorial on variable generation with fabricatr – targeted to a slightly more technical audience – contains more examples of the kinds of variables you can easily create with fabricatr. In addition, we have tutorials on creating time series variables, and on using other variable creation packages with fabricatr.